Designing cities, planning for people - the guidebooks of Otto-Iivari Meurman and Edmund Bacon

Urban theorists and critics write with an individual knowledge of the good urban life. Recently, writing about good urban life has boldly called for smart cities or even happy cities, stressing the importance of social connections and nearness to nature, or social and environmental capital. Although modernist planning has often been blamed for the many urban problems of today, the social and the environmental dimension were not completely absent from earlier 20th century approaches to urban planning. Links can be found between the urban utopia of today and the ideas about good urban life in the middle of the 20th century.

Changes in the ideas about the good urban life are investigated in this paper through two texts by two different 20th century planners: Otto-Iivari Meurman and Edmund Bacon.  Both were taught by the Finnish planner Eliel Saarinen, and according to their teacher’s example, also wrote about their planning ideas. Meurman’s guidebook for planners was published in 1947, and it was a major influence in Finnish post-war planning. In Meurman’s case, the book answered a pedagogical need, as planners were trained to meet the demands of the structural changes of society and the needs of rapidly growing Finnish cities. Bacon, in a different context, stressed the importance of an urban design attitude even when planning the movement systems of a modern metropolis. Bacon’s book from 1967 was meant for both designers and city dwellers, exploring the dynamic nature of modern urbanity.

The two books share an appreciation for historical context. There is an emphasis on physical space, a particularly typical architects’ attitude. This is not surprising since both were guidebooks for architects. However, the writers were also looking ahead and trying to solve the many urban challenges with architectural design solutions. Architectural determinism aside, the books are a testament of the prevailing urban trends and ideas about the good urban life, as well as an individual architect’s observations about urban space and how it is experienced.

A juxtaposition of the two texts gives an example of how the thoughts about the possibilities for well-being in the urban environment were subtly transformed in the middle decades of the 1900s. Functionalistic planning ideas touched with utopian idealism were still strong influences, the good life defined by those who saw themselves best equipped to plan for it. Cities were understood as organisms, the health of their citizens demanding well-planned living quarters and organized distribution of living and working areas, as well as equally well-planned connections to green spaces and nature. Eventually, planning processes were seen as the combined efforts and influences of many people, with public participation gaining more and more importance. The roles of both the citizen and the architect were evolving, as was the understanding of what kind of living environments cities should be. 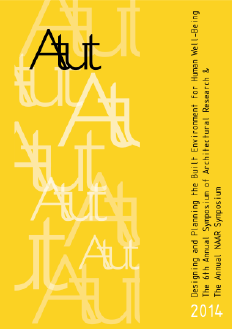 Proceedings of the 6th Symposium of Architectural Research 2014