Mårten Magnus Wilhelm Brenner (1843–1930) was a controversial figure in Finnish botany. He was a passionate non-professional botanist, amongst the most diligent Finnish writers of his time having published 220 articles or notes. He described 833 taxa, including 411 species, six subspecies, 196 varieties, four subvarieties, 199 forms and 17 subforms. Typifications of 151 names are provided in a separate article.

Brenner was particularly interested in the Hieracium taxonomy, but he studied several other plant genera and species during almost 60 years of botanical activity: Alnus, Erophila [Draba] verna, Euphrasia, Juncus, Linnaea borealis, Picea abies, Pimpinella saxifraga, Primula officinalis [veris], Rosa, Sorbus aucuparia, Taraxacum and Viola tricolor, for example. His descriptions resulted largely from his own collection activity without any synoptic work. Typically, each taxon was based on small, minor details, sometimes on a single or a few specimens, and often characterised by local distribution. Producing detailed infraspecific classifications was common practice in those times, apparently inspired by the German school of taxonomy, which was later called the Aschersonian approach.

For many obvious reasons, botanists of that and later eras did not appreciate Brenner’s taxonomic results. Only some Euphrasia (one taxa), Hieracium (11) and Taraxacum (20) names are currently accepted in the Checklist of Finnish vascular plants, and E. wettstenii var. botniensium has recently been recognised. Brenner’s interest was not restricted to vascular plants. He collected an amount of lichens in late 1869 and 1870 on the island of Suursaari in the Gulf of Finland, for example, and he published extensive floristic accounts of Suursaari and northern Finland. He focused also on ecology and was concerned about changes in nature resulting from human activity. In northern Finland he collected bryophytes, many of which were new to Northern Ostrobothnia. He wrote a review of the history of lichenology in Finland, which the editorial board considered supercritical and did not accept, and which he therefore released as a self-published edition.

Brenner became a member of the Societas pro Fauna et Flora Fennica in 1863, holding the position of Secretary in 1866–1876, and he was a member of the Printing Committee for the Publication Series in 1873–1878, 1884–1888 and 1890–1894. However, he was disliked because of his arrogant and presumptuous character, and he sometimes referred to the findings of others as his own at the monthly meetings of the Societas. Eventually, in 1890, he drifted into a polemical relationship with researchers working at the Botanical Museum. His extensive private herbarium was donated posthumously to the Botanical Museum, nowadays the Botanical Museum (H), Finnish Museum of Natural History (Luomus), University of Helsinki, and, he had already donated several batches of plant specimens he collected on trips funded by the Society. Carex brenneri Christ. is lectotypified here. 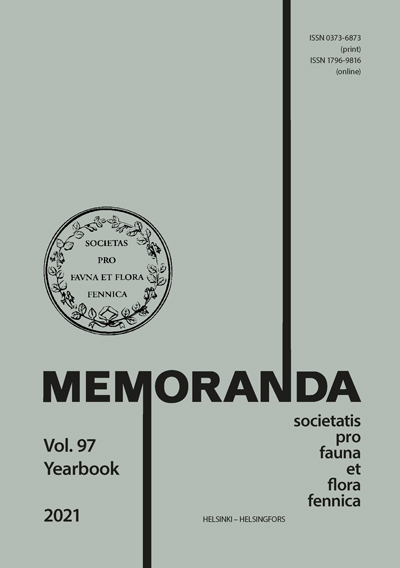