Allium ursinum L. is a perennial bulbous herb of broad-leaved woods of Western and Central Europe. Of two subspecies subsp. ursinum is distributed in Western Europe including the Nordic countries. The general distribution of A. ursinum in the Nordic countries is outlined. The localities for A. ursinum in Finland are the northeasternmost in Europe. The rather few localities are concentrated to the Åland Islands (Al) and the archipelago of Regio Aboënsis (Ab). They are described in a chronological order of the first find in each municipality. Several localities with A. ursinum as a cultivated plant or as a garden escape are referred to. The habitat requirements for Allium ursinum are discussed. Although A. ursinum has a broad distribution with a clear tendency to occur as a weed, it is still a habitat specialist with a rather narrow range of ecological tolerance as it requires a mesic well-drained soil and drought as well as waterlogging seem to be unfavourable. A. ursinum is moderately calciphilic in the southwestern archipelago of Finland. Many of the accompanying species, 32.5 % of all species, are regarded as calciphilic. Allium ursinum has been used as a spice by man since ancient times. Many of its localities point towards a fairly strong hemerophilic tendency. Of the 53 localities in Finland described, 17–19 can be regarded as more or less natural, 30–32 as cultivated or otherwise introduced and 4 as uncertain, because of insufficient information. Therefore we regard A. ursinum as a moderately hemerophilic species. The dispersal of the seeds by autochory or by myrmecochory is discussed. A possibility for hydrochorous dispersal of seedling is referred to. A. ursinum is most probably going to be more common in the future due to introduction to gardens as both living plants and seeds are sold in garden shops. Further, the warming of the climate will be favourable for this in Finland southern species. As a strong competitor in the field layer, A. ursinum may become a problem in protected areas in the future. 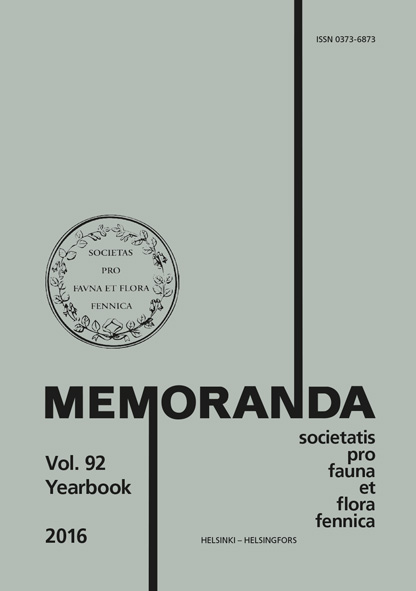