Garden history in academic gardens can be studied both from written and drawn sources, such as lists of plants and old maps. Another possibility is archaeobotanical analyses carried out in gardens. The aim of this study was to test archaeobotanical macrofossil analysis as a method in Uppsala Linnaeus Garden, founded in 1655 by Olof Rudbeck the Elder, and the former garden of Turku Academy, founded in 1757 by Pehr Kalm. The literature provided historical contexts of the gardens. For the archaeobotanical study in the Uppsala and Turku gardens, macrofossil sampling was carried out from the soil with a sampler and a total of 75 soil samples were collected from six different pits in Uppsala and from seven in Turku. Samples were floated and sieved, and macrofossil plant remains were identified. Pollen analysis was carried out from nine subsamples from Uppsala. Six macrofossil samples were dated with AMS-radiocarbon method. Altogether 839 macrofossils and 61 plant taxa were found. Pollen grains from 42 different taxa were discovered, but only four of them in greater numbers. Spores of ferns, moss and fungi were also present in pollen samples. Abundant macrofossil species were in Uppsala Chelidonium majus (116 seeds) and in Turku Chenopodium album (58 seeds), Plantago major (51), Polygonum aviculare (53) and Spergula arvensis (83). Interesting species were Chenopodium hybridum (47 seeds from Uppsala, four from Turku), found in the Hortus Rudbeckianus, listing species grown in Uppsala by Rudbeck and in the Hortus Linnaeanus, listing plants cultivated in Uppsala during the Linnean period; Datura stramonium (five seeds from Uppsala), also in both the Hortus Rudbeckianus and the Hortus Linnaeanus, and also on Kalm’s list of plants cultivated in Turku; and Sambucus racemosa / S. canadensis (23 seeds from Turku), found in the Hortus Linnaeanus and on Kalm’s list. Pollen grains of the group Asteraceae, which contains garden plants, were found in seven soil samples in Uppsala Garden. In addition, chips of wood and charred wood, small animal bones, and fish scales and bones were found in both gardens referring to soil improvement and indicating gardening. Fungal spores that grow on animal dung could indicate manure and thus gardening as well. Sampling in the garden sites gained information of plants and gardening that would not have been discovered without this study due to the improbability of excavations at the sites. The results could be interpreted as an example of macrofossil assemblages typical of garden sites. Although the macrofossil material found in both gardens was relatively scarce, some equivalent taxa were discovered. However, these could not alone allow a conclusion of strong connection between the gardens, but since the proof of the affiliation exists in the literature, the similarities in the macrofossil materials of the gardens can be attributed to their close relations. By combining macrofossil and pollen analyses and with application of AMS-radiocarbon dates the study was able to collect more knowledge of the garden sites than through macrofossil studies alone. In investigations of garden soil, even more multidisciplinary approach with addition of methods, such as chemical analyses of soil, and analyses of insect remains and phytoliths, could probably gain more extensive evidence of past gardens. 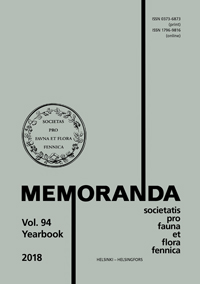 Published
2018-05-08
How to Cite
Alanko, T. (2018). An archaeobotanical view on the history of the Uppsala Linnaeus Garden and the Garden of the Academy of Turku. Memoranda Societatis Pro Fauna Et Flora Fennica, 94, 39-66. Retrieved from https://journal.fi/msff/article/view/75981
Download Citation
Issue
Vol 94 (2018): Yearbook 2018
Section
Articles