Populations of Gymnadenia conopsea (L.) R. Br. have been studied and monitored for many years in the Savonlinna area, in the Province of South Savo, South Finland. Two kinds of populations were recognized, one with red flowers and another with white flowers, the latter being taller, with longer and denser inflorescences and broader leaves. There is also a difference in the flowering time: the white-flowering populations flower ca. seven to ten days later than the red-flowering ones. Genetically, the white-flowering populations belong to G. conopsea, even though morphologically resembling G. densiflora (Wahlenb.) A. Dietr., which has not been recorded from Finland. The white-flowered, tall plants are described here as a new variety G. conopsea var. scitula T. Kettunen. In addition to the Savonlinna area, similar plants have been collected or recorded from a few places in the provinces Satakunta, South Häme, North Häme, North Savo and North Karelia.
In Finland Gymnadenia conopsea has often been divided into two geographical races, mostly treated as varieties. The northern race is here recognized as a subspecies, G. conopsea subsp. alpina (Turcz. ex Rchb. f.) Janchen ex Sóo, and its taxonomy, synonymy and nomenclature are discussed. If treated as a variety, the accepted name is G. conopsea var. lapponica (Zetterst.) Hartm. Its basionym, Orchis conopsea var. lapponica Zetterst., is lectotypified and its identity confirmed. 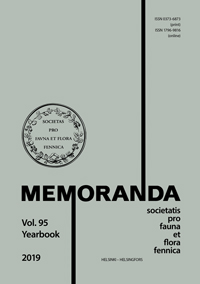